Poker results are generally measured in big blinds per 100 hands won. In the research community, the standard measure is milli-big-blinds per hand (or per game), or mbb/g, where one milli-big-blind is 1/1000 of one big blind. This is also used as a measure of exploitability, the expected loss per game against a worst-case opponent. A player who folds every hand will lose 750 mbb/g on average in a heads up match (1000 mbb/g as big blind and 500 as small blind).

There are three main ways to evaluate poker agents – against a best response opponent, against other poker agents, and against human opponents. Evaluation can be difficult due to the inherent variance in poker, but this can be minimized by playing a very large number of hands and also by playing in a “duplicate” format, where, for example, two agents would play a set of hands and then clear their memories and play the same hands with the cards reversed (only possible when humans are not involved). Further, an agent that performs well in one evaluation metric is not guaranteed to perform well in others.

The purpose of calculating a best response is to choose actions to maximize our expected value given an opponent’s entire strategy. The expectimax algorithm involves a simple recursive tree walk where the probability of the opponent’s hand is passed forward and the expected value for our states (I – information sets) returned, involving just one pass over the entire game tree.

Best response has advantages over comparing strategies by competing them against each other since it is a more theoretical measure and because problems can arise when doing agent vs. agent evaluations, like intransitivities (e.g. Agent A beats Agent B and Agent B beats Agent C but Agent C beats Agent A) and variance.

The standard best response method involved “examining each state once to compute the value of every outcome, followed by a pass over the strategy space to determine the optimal counter-strategy”.

This figure shows different trees representing Kuhn (1-card) poker. The left tree, titled Game Tree, shows the exact state of the game. The squares are public nodes since bets are made publicly, while the circles are private nodes since player cards are private only to them. In the two rightmost trees (P1 and P2 Information Set Trees), the opponent chance nodes have only one child each since their chance information is unknown to the other player.

Instead of walking the full game tree or even the information set trees, it was shown that we can improve the algorithm by walking only the public tree and visiting each state only once. When we reach a terminal node such as “A,B,X,Y”, this means that player 1 could be in nodes A or B as viewed by player 2 and that player 2 could be in nodes X or Y as viewed by player 1. The algorithm calls for passing forward a vector of reach probabilities of the opponent and chance and recursing back, while choosing the highest valued actions for the iteration player’s perspective and returning the sum of child values for the opponent player, and then at the root, the returned value is the best response to the opponent’s strategy.

The best response algorithm in the below figure takes as inputs the history of the actions, the current player (the algorithm must be run for each player), and a distribution of the opponent reach probabilities (line 2). An additional D variable is set on line 12 to define the opponent’s action distribution. Then for each action possible, if the node does not belong to the current player, then we iterate over each opponent possible cards, find the probability of the player playing those cards, and update the reach probability accordingly. A new variable w[a] is also introduced on line 19 to sum the probabilities over all cards that are taking a certain action. Line 21 recurses over the best response function to find the value of taking each action from that node, and then on line 22-23, if that action value is better than the previous value (which is defaulted at negative infinity), then it is assigned as the value for that node. 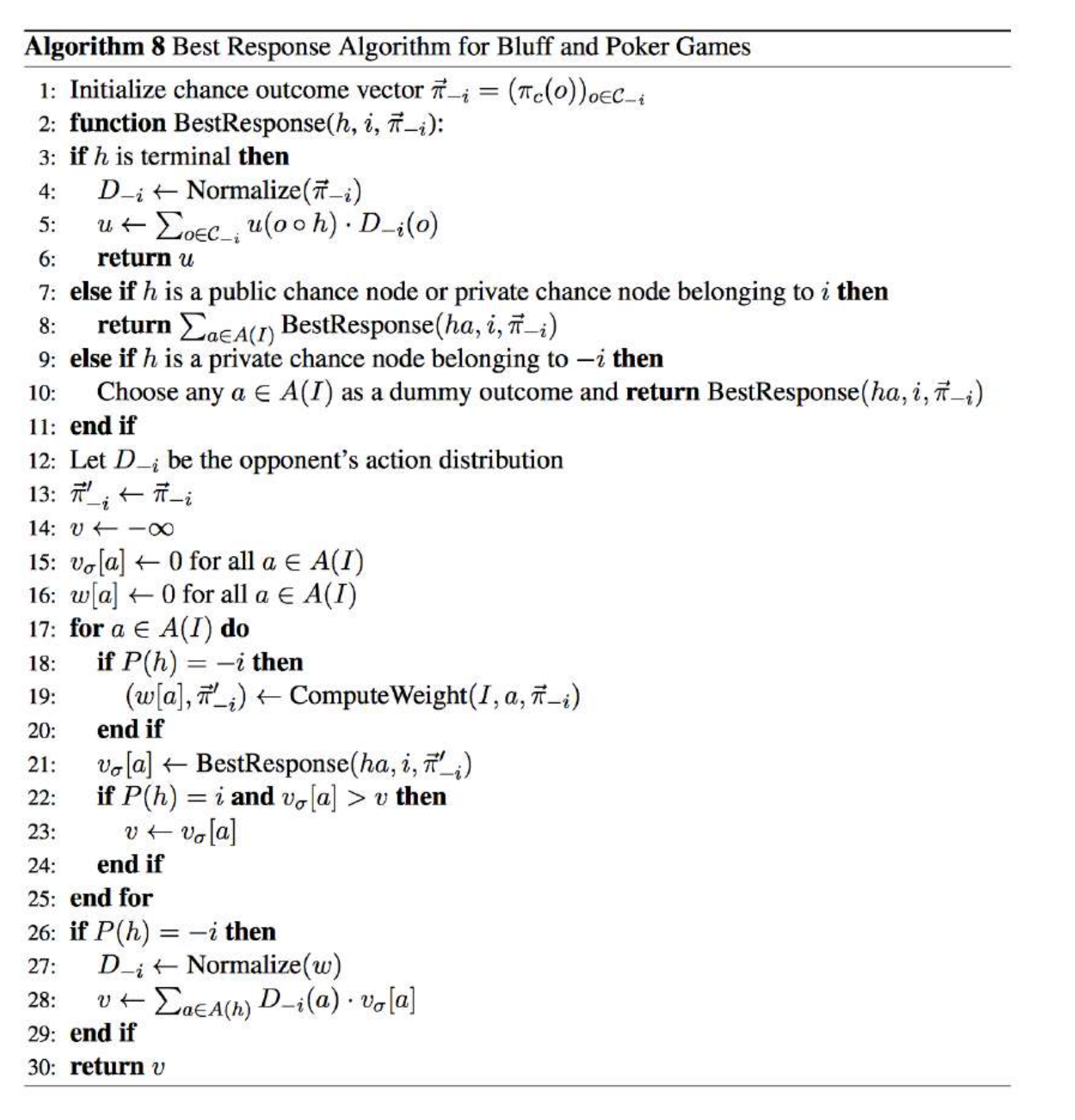 Here’s how the algorithm works in practice in conjunction with CFR:

Here is an implementation of the best response function in Python for Kuhn Poker:

Agent against agent is a common way to test the abilities of poker programs. This is an empirical method for researchers to evaluate agents with different characteristics, such as different abstractions. If a game theory optimal agent exists for a game then another agent could play against the GTO agent as a measure of quality.

Researchers from around the world competed annually at the Annual Computer Poker Competition that began in 2006 and is now part of the Poker Workshop at the annual AAAI Conference on Artificial Intelligence. It has competitions in limit, no-limit, and later 3 player Kuhn poker (most recently only no limit competitions were played). This uses duplicate matches and two winner determination methods – instant run-off, which eliminates the worst agent in each round and bankroll, which gives the win to the agent with the highest bankroll in that event. This means that there are different incentives for agents that play a more defensive vs. more aggressive strategy.

The main issue with playing against human opponents is that win-rates can take approximately one million hands to converge. The 2015 Man vs. Machine competition involved 80,000 hands total against four opponents, which led to disputes over statistical significance of the results.

Despite the difficulty of achieving very large hand samples against human opponents, there is still value in these test games, as human experts are capable of quickly analyzing a strategy and the playing statistics of that strategy, so a computer program can be sanity checked and evaluated for unique tendencies by such human experts. Computer programs could also be made available on the Internet to play against many opponents to obtain significant levels of data. In practice, most of the breakthrough agents have only been released to play against select top players since this is considered more significant than playing against random players and perhaps to keep the agents’ strategies more private.